Ricardo (Richard) Ramírez, dubbed the Night Stalker, raped and killed indiscriminately.  The child of an abusive father, he turned to drugs at an early age.  He was 12 years old when his older cousin returned home from Vietnam.  His cousin, whom he looked up to, would regale him with glorified tales of raping and killing the Vietnamese people, complete with Polaroid pictures.  Richard soon witnessed his cousin shoot his wife in the face over a disagreement.  A high school dropout, he eventually moved to Los Angeles where he lived a mostly transient life, stealing from others to support his drug habit.  Believing that he was serving Satan, he raped, beat and mutilated some his victims while shooting others.  Richard broke into people’s homes and savagely attacked the young and the old alike.  Those who survived said that he had rotten teeth and foul breath.  He made some of them swear to Satan that they had given up all of their valuables.  He was a vicious killer who never showed any remorse.  When asked if he would admit to being evil, he replied, “We are all evil in some form or another, are we not?”  He died in prison from blood cancer complications and his skin turned a “shocking shade of green,” likely due to his liver and other organs failing. 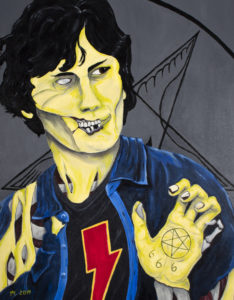 I was inspired by photographs of Richard in court with a pentagram drawn on his palm. His defiance and lack of regard for authority was evident in his behavior throughout the trial. A life of drugs and poor hygiene left Richard’s teeth rotting from decay and victims noted his foul breath in their statements. Ramirez was sentenced to the death chamber, but dying at 53 years old from complications of B-cell lymphoma. When his organs shut down, his skin turned bright green. Due to the “rotten” nature of his childhood, I chose to portray him in a state of decay, the greenish skin is a nod to death. Richard was a big fan of AC/DC, a fact that unfortunately brought the band under scrutiny as the public tried to force a connection there. 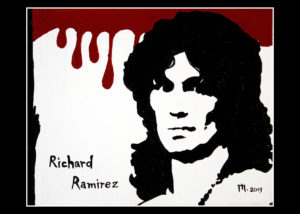