Jeffrey Dahmer was a shy, introverted child who struggled with feelings of insecurity and grew up to become a monster. As a child, he was fascinated with dissection and often experimented on road kill. Jeff did not kill for pleasure and claimed that he did not enjoy dismembering his victims’ bodies.  His fantasy was to have a sexual partner who was completely compliant, but he was unable to express these desires.  Instead he drugged and killed unsuspecting young men and had sex with their corpses.  He attempted to give at least three of his victims lobotomies hoping to create sexual zombies so that he would not have to deal with disposing of the bodies.  He drank heavily in an attempt to escape both his urges and his guilt.  Jeff kept photos and body parts, skeletal remains, of his victims as souvenirs.  He eventually began eating the hearts and muscles of his victims because he wanted to keep them with him forever. 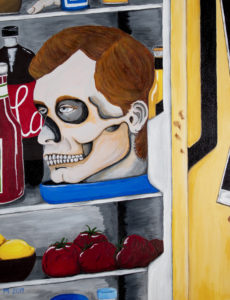 There is a lot going on in this painting. Everyone knows that Jeffrey kept heads of his victims. He was obsessed with human skulls, trying to preserve them so that he could build an altar from them. For this reason I chose to put his head in the refrigerator and paint his face with a skull. The tomatoes are beginning to rot, representing the state of decay that surrounded him in his apartment. Polaroids hang on the refrigerator door because Jeff kept photos of his victims in various states. The bottle of beer, the soda and the lemons are all representative of the fact that he would give his victims drinks laced with drugs to make them compliant. The ketchup has no significance other than I can only imagine that human flesh might need a condiment or two. 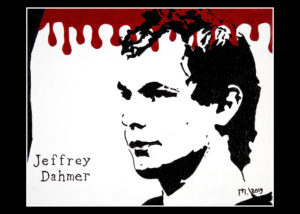