Ted Bundy was good looking, charming and undeniably narcissistic.  He was very intelligent, had gone to law school and at one time thought of a career as a politician.  He was dripping with so much charm that even the judge who sentenced him wished him well and opined that had he gone another way he would have liked to have seen him practice law in his courtroom.  Ted relished being the center of the media’s attention, in the spotlight he felt he deserved.  It seemed as if he thought that he was above human law.  He was better, smarter that the rest of us and untouchable by our legal system.  Throughout his trial he appeared calm and confident, like he just knew he was going to beat the system.  He was relaxed and in control, until he wasn’t.  The idea of being convicted was so implausible to him; perhaps it hadn’t even occurred to him that he might lose.  The disturbing image of Ted Bundy releasing a torrent of previously pent-up rage is the face of evil that only his victims may have seen. 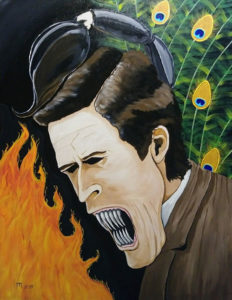 Inspired by the photograph of Ted in the courtroom looking like he was yelling in anger, I envisioned his mouth exaggerated and elongated. The teeth are homage to the prosecutor using a cast of his teeth to link him to one of his victims by way of bite mark. His eyes are black because he could be called soulless. The fire represents the rage that burned within. The scorpion tail represents how dangerous he was and the peacock feathers represent how full of himself he was. 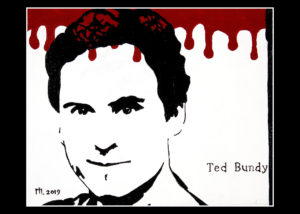 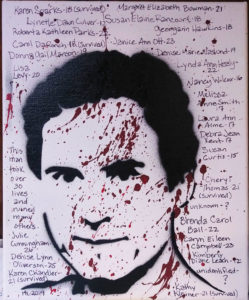 Ted Bundy confessed to 36 murders, but the number could actually be much higher. Below are the names of the 25 identified victims, 5 of which survived.